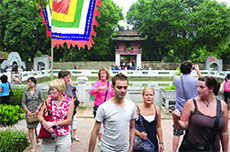 has been ranked second in Asia in terms of tourism development potential, just after China. This is according to a survey of 1,200 tourism managers around the world about global tourism trends announced at the World Travel Market 2013 in London.

The latest figures by the United Nations’ World Tourism Organisation showed that tourist arrivals to the Asia-Pacific region increased about 6 percent on average in the first half of 2013. Of this, South Asia tourist arrivals rose by 7 percent, while those of Southeast Asia soared 12 percent.

Also according to the World Tourism Organisation, Chinese travellers spent a record USD102 billion in international tourism in 2012, surpassing US and German tourists, both with spending close to USD84 billion.