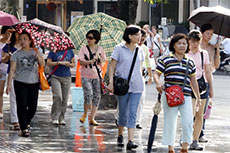 onal Administration of Tourism has worked with Japan National Tourism Organisation to review tourism cooperation between the two sides.

During the 2003-2012 period, Japanese tourist arrivals to Vietnam increased 2.75 folds, with an average growth rate of 12 percent per annum.

In 2012 alone, Japanese tourists made up 9 percent of all foreign visitors to Vietnam. In the first ten months of 2013, nearly 500,000 Japanese tourists visited the country, a year-on-year rise of 5.6 percent.

Deputy General Director of Vietnam National Administration of Tourism Nguyen Manh Cuong said that in the near future, Vietnam and Japan will continue to focus on exchanging tourists, supporting technique and developing human resources.